The Ministry of Casual Living (All Ages)

Shape, outline, the body, the binary, peeking into other people's windows at night, inventing our own truths, celebrating the shadows

Refreshments & snacks available (cash only). 10 mins by bike from downtown Victoria. Curated by Aimée van Drimmelen and Valerie Salez. Poster design by Emma Thais Holland and Jameel Mulani. Thanks to the Victoria CRD, MediaNet, VIVO and SUPPLY Victoria for their support.

“I was in the process of learning iMovie and exploring possibilities of chopping up video footage into little clips and repeating them or reversing their direction, changing their speed, etc. Later, I pretty much rejected this approach to making video.” Music: “Automatic Music” - Stereo Total; Video: credit sequence from “Dr. No” (1962) re-edited in iMovie; original film credits by Maurice Binder, Trevor Bond

A response to the mournful song by Brian Eno, the dancer (Pepper) takes control of the depiction of the titular Rosalie through her relationship to the camera. She explores how a solo dance performance is choreographed for the camera as well as for the space of a TV screen. The dance was created through editing and shot blocking [framing] of the physical shapes made by her body, a then-radical approach to choreographing the body and face in a relationship to technology. The performance was filmed at Cable 10 Studio; MTV would launch a few years later.

“Blossom is an animated diary that I have hand drawn over the past 4 years. In this animation, I express my emotions with relevance to my womanhood through exploring the varying ways I can metamorphosis and contort a stagnant image of my body. Every contortion that I draw represents a particular feeling and experience that I’ve had. In the animation each of these contortions shift into the other, telling my personal story over the course of four years, all drawn and presented in chronological order.”

Lotte Reineger was German avant garde animator. A pioneer of silhouette animation, she made her first film in 1919, and created one of the first feature length animations, “The Adventures of Prince Achmed” in 1926. Reiniger devised a multiplane camera technique that she used to make over 40 films, and she found herself at the centre of a large group of ambitious German animators, including Berthhold Bartosch, Hans Richter, Walter Ruttmann and Oskar Fischinger.
--

THIRZA CUTHAND IS AN INDIAN WITHIN THE MEANING OF THE INDIAN ACT (8:40)
Thirza Cuthand
2017

Contemplating mixed race identity in Canada, Cuthand presents us with images of blood ties and land ties for indigenous people, and questions the use of the words "white passing" and "light skinned." As a light skinned indigenous woman, Cuthand reiterates that racism and discrimination still happen for her, just in different ways. Community belonging is contrasted with the difference experiences she has from her darker skinned family. Ultimately, a video with more questions than answers, it situates the artist's body in historical trauma and ongoing colonial survival.

Created for this event, local filmmaker Iva Jelovina unveils a silhouette animation made manipulating dirt on a light table. “Paraeidolia (parr-i-DOH-lee-a) is the tendency to interpret vague stimulus as something known to the observer, such as seeing shapes in clouds, seeing faces in inanimate objects or abstract patterns, or hearing hidden messages in music...”

Mary Ellen Butte was a pioneer American film animator significant as one of the first female experimental filmmakers. Her specialty was visual music, “painting with light”, and attempting to create “moods through the eye”. While working in New York between 1934 and 1953, she made fourteen short, abstract musical films. She worked with Leon Theremin and Thomas Wilfred and was also influenced by the abstract animated films of Oskar Fischinger.

Hy Hirsh was an American photographer and experimental filmmaker who was regarded as a visual music filmmaker, as well as one of the first filmmakers to use electronic imagery (filmed oscilloscope patterns) in a film. He treated films as malleable objects by constantly editing and re-editing them, using live music instead of pre-recorded soundtracks.
--

“I live a few blocks from an industrial area where a lot of cruising goes on after hours. Whenever I walk through the neighbourhood, I always look, I always feel guilty and I always wonder...”

Len Lye was a New Zealand artist known primarily for his experimental films and kinetic sculpture. He commonly used a “direct filmmaking” technique, scratching or painting directly on film and rarely using a camera.

Lawrence Jordan is an American independent filmmaker who is most widely known for his animated collage films. Based in the San Francisco Bay Area, he has made over seventy experimental films, including a number made from collaged cut outs of Victorian engravings. He was a mentor and friend of experimental filmmaker Stan Brakhage.

--
The Ministry of Casual Living is an artist run centre established to provide artists from all disciplines with an accessible venue for experimentation and committed to promoting critical, self-reflective discourse, and integrating the artistic process into all aspects of everyday life. We are located on the unceded territories of the Lekwungen-speaking peoples, now known as the Songhees and Esquimalt Nations. https://ministryofcasualliving.ca 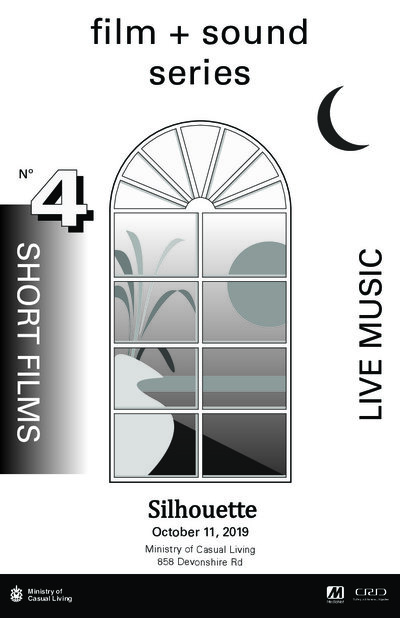