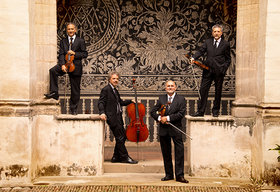 Founded in Mexico in 1982, Cuarteto Latinoamericano has toured extensively and premiered more than a hundred works written for them. Winners of the 2012 and 2016 Latin Grammys for Best Classical Recording, they have been recognized with the Mexican Music Critics Association Award and three times has received Chamber Music America/ASCAP's "Most Adventurous Programming" Award.

This concert is part of the 35th Annual Colloquium of the Department of Hispanic and Italian Studies.