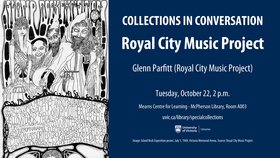 Music: Jazz / Blues, Pop / Rock / Indie Literary: Author Readings Cultural / Heritage: History / Heritage
The Royal City Music Project , co-founded by Glenn Parfitt in 2002, documents music history in Victoria and the West Coast. Parfitt will discuss the Royal City Music Project website, which won the Hallmark Heritage Society Communication Award in 2016, and his collection of documentaries, publications, pictures, posters, records, cassettes, and memorabilia dating from the 1950's to today. Join us for a trip back in time to learn about Victoria's musical past.

other sites: cbc
Glenn Parfitt is a third generation Victoria native. Growing up in a musical family, Glenn was expected to learn and play a musical instrument along with singing in key. At an early age, it was determined that these skills had skipped a generation as Glenn's musical abilities never developed but his love of music was highly developed. In February o... more info
Articles: A passing of the torch for Victoria’s rock music history archives, 1964: Beatles' TV appearance sparked cultural revolution, High times in Victoria: Remembering the Summer of Love, Welcome to rock ’n roll city
Submit info on this show to our admins