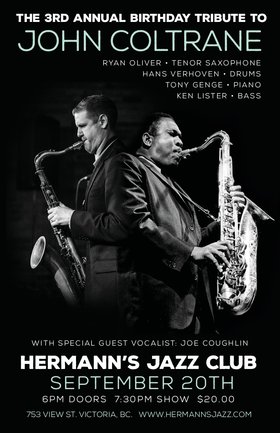 Music: Jazz / Blues
Tough toned, Juno-nominated saxophonist Ryan Oliver honed his craft living on Canada’s west coast, and in Amsterdam, Toronto and New York and has performed throughout the world with his own groups as well as touring with The Shuffle Demons for the last 15 years. His stellar quartet will be performing a night of John Coltrane music in honour of Coltrane's birthday.