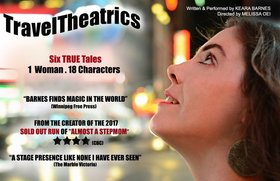 "I never wanted the show to end. Barnes is as astonishing a solo performer as they come" (Two Pence & Two Cents)

From UVIC Theatre grad Keara Barnes, Traveltheatrics is a solo show featuring 6 TRUE tales from across the globe, from the mountains of Malaysia to the medinas in Morocco. Most recently, TravelTheatrics was one of three plays selected nationally for the Stage One Festival of New Canadian Work at Lunchbox theatre.

"A splendid storytelling/theatrical adventure" (The Visitorium)

"Barnes is a charming performer. She skillfully enlivens her characters and shows a strong facility for accents. Traveltheatrics is well structured, beautifully written and well performed" (CBC)

“Barnes has a remarkable physical and vocal presence on stage” (CBC)

"A born storyteller" (The Calgary Herald)