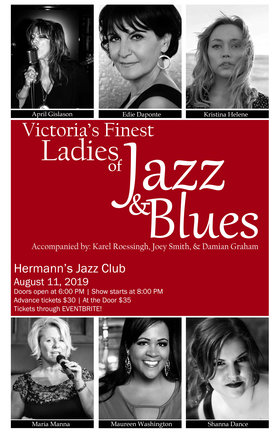 Equally at home in an intimate lounge setting or an outdoor festival stage, Edie Daponte has established a reputation in the music scene of Vancouver Island and Western Canada as a dynamic and engaging performer. Edie brings passion, playfulness and an evident love of performance to her live shows. Vancouver island Music Awards awarded Edie with "J... more info
Videos:

April Singer Songwriter Musician (250) 592-0967 From a powerful ballad to hard edge rock this vocalist can sing it all. April was born in New York City, April 1, 1955 to proud parents Victor and Lillian Fulladosa. Her father was an officer in the Marine Corp and moving around was just part of the deal. She and her younger two brothers were rais... more info
Videos:

17 VALDY - YES I CAN - COMING FROM THE SKY CONCERT

With a vocal style that encompasses the soul of Etta James, and Carmen McRae, the modernity of Holly Cole and the playfulness of Jann Arden; Maureen Washington evokes comparison to some of the great female Jazz singers of our time yet remains one of a kind. Maureen Washington songstress for a variety of different ensembles, began her music career ... more info
Audio: 01 Harvest Moon, 05 St James Infirmary, 13 Wait A Little Longer
Articles: Neil Young's Harvest Moon given new life in B.C. jazz star's latest album, Maureen at Christmas
Videos:

Shanna is a young singer who sounds like shes been singing for decades. She has the abilities to capture the old and pure sound of a traditional jazz standard. She can have the soft, soul touching sound of an Eva Cassidy ballad; the jazzy qualities of Annie Ross or belt a soulful tune like Dusty Springfield. Shanna has always been a singer, since ... more info
Audio: St. Louis Blues, Come Away with me
Videos:

Kristina is a Calgary born singer/songwriter. She wrote her first song at the age of eight and recorded for her first time in a little garage four years later. She then went on to work with producer Greg Gunhold and was nominated semi-finalist in the ISC (International Songwriting Competition) at the age of 15 two years in a row for her song "From ... more info