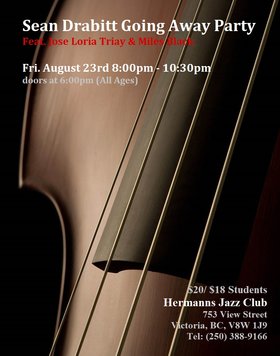 Music: Jazz / Blues
Miles Black:
Based in Vancouver, BC, Miles Black is a highly respected career musician bringing an enormous wealth of musical experience and expertise to most every facet of the music industry. Firstly known as one of Canada's most accomplished jazz pianists, Miles is also highly acclaimed and sought after as an arranger, producer, composer, session musician, guitarist, vocalist, bassist, saxophonist, songwriter, and musical theatre director. Adding to that, he has worked as a music therapist and collegiate music instructor. Especially in Vancouver, Miles Black is well know as the "first call' when musicians are looking for top professional enhancements to their projects.

Jose Loria Triay:
From Mexico, Jose Loria Triay is an incredible drummer that is new to town. Coming from living in New York City, Jose is someone to check out if you have not gotten the privilege of hearing him perform with Misha Piatigorsky last time he performed at Hermann's Jazz Club.

Sean Drabitt:
Sean Drabitt left Victoria 24 years ago to study Jazz bass in Los Angeles with mentor John Clayton. The next decade he spent first in New Orleans, where he worked with all members of the Marsalis family, then in New York, working with the best young players on the modern jazz scene, Kurt Rosenwinkel, Mark Turner, Eric Harland and Ari Honig among them. Specializing in a hard driving hard bop informed style of bass playing he returned to Victoria close to 15 years ago. Today he divides his time between various projects on both electric and acoustic bass. More recent career highlights have included a western Canadian tour with Terrell Stafford’s quintet in 2012 and a number of gigs with pianist George Colligan.
Sean’s played in over 40 countries and spent a year teaching bass at two colleges in Seoul, Korea.

Hope on the Horizon
by  Michael D.Munday