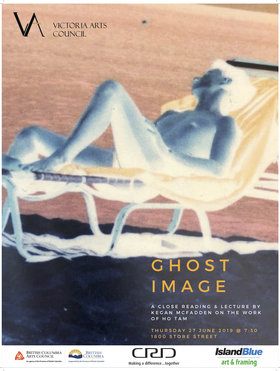 In this close reading of Tam's recent work, including an ode to his lover Kirby who died of an AIDS-related illness during the 1990s, McFadden will offer insight into the exhibition as a whole as well as related research such as a short story by french author and photographer Hervé Guibert (1955-1991). McFadden will talk about stories, influences, and how these two fleeting things can be made material.

Cover to Cover offers a selection of photo, video, artist books, and magazines spanning Ho Tam's career. The exhibition deconstructs the artist's recent book works displaying selected pages and images on the gallery walls connecting with earlier works installed organically so the images exists as a free flowing collage. Tam's long time investigation into place, memory, queerness, and the body is shown through works that blend together to create a larger installation engaging the breadth of his artistic production.
____________________________
HO TAM was born in Hong Kong, educated in Canada and the U.S. and worked in advertising companies and community psychiatric facilities before turning to art. He practices in multiple disciplines including photography, video, painting and print media. His first video, The Yellow Pages, was commissioned by the public art group PUBLIC ACCESS for an installation/projection at the Union Station of Toronto in 1994/95. Since then Tam has produced over 15 experimental videos. He was included in the traveling exhibition Magnetic North: Canadian Experimental Video by Walker Art Center, Minnesota. His feature documentary film Books of James was awarded Outstanding Artistic Achievement (Outfest, LA) and Best Feature Documentary (Tel Aviv LGBT Film Festival). He also publishes several series of artist’s books and zines. Tam is an alumni of Whitney Museum Independent Studies Program, Bard College (MFA) and recipients of various fellowships and artist’s grants.

A writer, curator, and artist, KEGAN McFADDEN has given lectures at artist-run, public, and university galleries throughout Canada. Originally presented to accompany Cover to Cover at Platform Centre in Winnipeg, and then revisited for the Richmond Art Gallery last year, this will be the third time McFadden offers this specific lecture though he will alter it to reflect the context of Victoria in 2019.