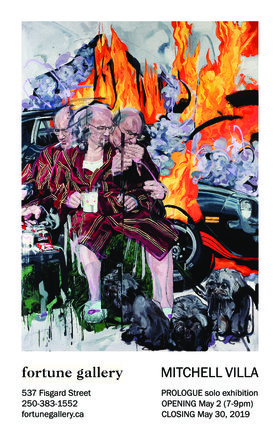 Visual Arts:
Mitchell Villa art exhibit - PrologueMitchell Villa’s paintings defy the squared borders and flat surface of their canvases, they reflect time as a sequence rather than a moment, and they stir the eyes and imagination.

While Villa’s characters are vividly familiar, his interest is in the life more than the likeness. His bold paint applications, brisk brush strokes, obfuscation and distortion of his figures bring their, and his, raw inner energy through the frame. We do not see a distinction between Villa’s inner life and his subjects’ - indeed the role of the artist here is not the typical removed observer exposing life, rather Villa is the central confessor revealing it. He allows his life in the current to inform his direction. While it is clear that persistent themes and sensibilities play through Villa’s pieces, each one reflects something he is in the midst of reckoning with. There is an emerging sense of violence and aggression to perceive in his work, but this perception is guided by Villa’s sense of beauty in a composed and stylized violence with filmic influences.

His process follows movement, while his brush stroke reflects his subjects in motion. Villa works in layers, applying, reapplying, and distorting. Sections of the canvas seem like spliced film frames, while others imply motion blur, collage, trace-lines, smudge, and saturation among their emotive effects. Villa challenges the single moment usually reflected in a two dimensional composition. His figures seem to move through time and out from the frame. Their energy is amplified by his large scale and bold colours, which draw the viewer inside.

Villa’s style could be described as a form of subjective realism. It is representational, but of emotional exposure rather than photographic surface. The spontaneity in this exposure is earned through foundational preparation. Villa renders his work from photo references to the point of close resemblance. This becomes the jumping point for deconstruction, stripping away, and abstracting upon the image towards its inner energy.

The vigour and scale of Villa’s application serve his emphasis on intensity and visual excitement. There is discipline in this emphasis; each stroke is purposeful, and serves a process of addition and subtraction towards an overall unity. Another disciplined element of the visual energy that radiates from the work is the physical energy that goes into it. Villa involves his whole body, executing long strokes across his full arm span, and vertically from the floor on his knees to the top of a ladder. The viewer in turn is drawn into the almost cinematic scale, and in keeping with the real life drama he reflects, Villa makes it difficult to turn away.

Mitchell Villa is a primarily self taught artist. Drawn to the endless possibilities and mark-making applications of the painting medium, he began experimenting with acrylics early on and transitioned into oil in 2018. Villa has established himself as a painter in Western Canada, eventually settling down his practice in Victoria, BC, where he finds the quieter pace of the city better suited to the containment and focus a studio practice requires.

Villa studied Visual Arts and received a diploma in Digital Design at Vancouver Film School. He was a regional semi-finalist in the Bombay Artisan Series and has been showcased at Fortune Art Gallery, Sooke Fine Arts, Polychrome Fine Art and the Art Gallery of Greater Victoria.

Mitchell Villa is a primarily self taught artist. Drawn to the endless possibilities and mark-making applications of the painting medium, he began experimenting with acrylics early on and transitioned into oil in 2018. Villa has established himself as a painter in Western Canada, eventually settling down his practice in Victoria, BC, where he finds... more info
Videos: