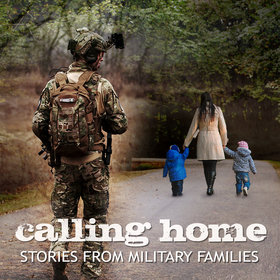 Theatre:
Imagine having an argument with your wife about how she should deal with her in-laws, but there’s a 15 second delay on your satellite phone so by the time she hears you, she’s already said something more. Taking the stage in Victoria this April 11 - 14, 2019 is Calling Home, a new documentary play about Canadian military families separated during deployments to Afghanistan. The show brings to life the heartbreaking, relatable, and even hilarious experiences of families trying to keep a sense of connection alive across time zones.

Playwright Dr. Kristin Atwood interviewed military personnel and their spouses during the course of her doctoral research, hearing Canadians speak about "family being doled out in 15-minute increments" via Skype, telephone and mail. The play weaves verbatim interviews with live projection, music, and movement to dig into the women’s and children’s experiences that are often overlooked in tales of war.

The show is directed by Victoria’s Kathleen Greenfield, co-creator of fan-favourite five-star shows Little Orange Man, Kitt & Jane, and Interstellar Elder, and director of the William Head on Stage prison play Sleeping Giants. SNAFU’s initial workshop performance of Calling Home sold out at a record speed, so be sure to grab tickets in advance. Calling Home is live at the Metro Studio Theatre April 11 - 14th, with tickets available through Eventbrite and the SNAFU website, http://www.snafudance.com.