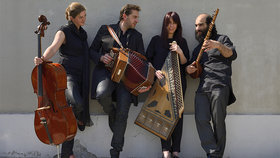 Music: Classical, Folk / Celtic / Latin / World
“BEYOND THE HORIZON” – An unprecedented meeting between the deeply moving worlds of Belgian accordionist Didier Laloy and Iranian musical adventurer Kiya Tabassian (setar/voice), along with Kathy Adam (cello) and Didem Basar (kanun). This collaboration between Montreal-based Constantinople and Duo Belem will immerse you in a marvellously rich acoustic world, one of breathtaking originality and virtuosity.

ABOUT CONSTANTINOPLE – http://www.constantinople.ca
Constantinople is a musical ensemble that chose the journey—geographical certainly, but also historical, cultural and inner—as its cornerstone. Inspired by the ancient city illuminating the East and West, Constantinople was founded in 1998 in Montreal by its artistic director, Kiya Tabassian. Regularly invited to perform in international festivals and prestigious concert halls, such as the Salle Pleyel, the Berliner Philharmonie, Cervantino Festival, or the BOZAR, Constantinople is acclaimed by the public, music professionals and critics alike. The ensemble has 17 albums to its credit. Over the course of a decade, Constantinople has created more than 40 works and travelled to nearly 140 cities in 30 countries.

ABOUT DUO BELEM - http://www.didierlaloy.be
Belem is a meeting of the unexpected: a striking combination of the placid eloquence of the cello and the rhythmic edginess of the accordion. The duo is forging a new type of chamber music that draws on folk and classical traditions. The result is a spirited sound world for the 21st-century — reflective yet edgy; sensuous yet melancholic; spontaneous yet considered. Both charismatic virtuosi, Didier Laloy and Kathy Adam herald a fresh approach to established musical traditions.