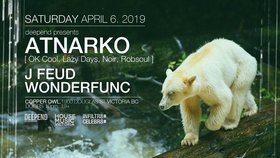 Music: Electronic / DJ
From the Swamps of Florida Atnarko has emerged in a big way this year. Culminating with his recent set for Cityfox NY including a notorious B2B2B set with Art Department and MR C. and his status as an OK Cool Resident in Detroit. Atnarko ’s production’s and DJ sets are notoriously hypnotic and deep and skillfully executed.

Atnarko’s own sleek productions - which he describes as “Hypnotic
House music for weirdo's ” have been released for underground
imprints like,Noir,Lazy Days, 20:20 Vision, Robsoul, Faceless , Motek and many more. His latest release is his biggest yet. The Collaborationwith Noir and Lomez entitled "lost again" was one of Pete Tongs Essential tunes of the year. Atnarko keeps a busy DJ Schedule , with a heavy stateside tour schedule offset by trips to Europe. You can also catch him at his own Infiltr8:Celebr8 parties.over the last year alone Infiltr8:Celebr8 has hosted Doc Martin, Three, Phonique ,Thugfucker , Christain Martin, Silky, David Keno , Fred Everything and more.This year has been his biggest year yet, with appearances at Okeechobee Festival, Buku Fest Late, Secret Garden , and Citifox alongside his regular club gigs. Atnarko sets are well thought out journeys , music for your mind and body.

“I’m constantly seeking new ways to get musical, but something
always leads back to house. Maybe it’s because of the connection to the dance floor or the friendships that have been made along the
way,” says Atnarko. This attitude, combined with a dedication to his
craft and a creative drive to consistently try new things and push
boundaries, guarantees that Atnarko will continue to be a name on the rise and an important, notable figure in dance music for years to come.

With Support from: J Feud & Wonderfunc.