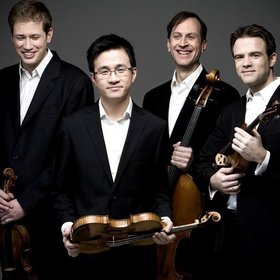 Music:
The Victoria Conservatory of Music is thrilled to welcome the world-renowned New Orford String Quartet back to the Alix Goolden Performance Hall stage!

For the final chamber music concert in this year’s VCM Presents series, the concert will feature selections by Brahms, Beethoven, and a new work by Canadian composer Uriel Vanchestein.

“We are all very proud of our Alum Jonathan Crow, a former student of our founding String teacher Sydney Humphreys. In addition to the amazing success Jonathan has seen as soloist, concert master of major Canadian orchestras, and as renowned chamber musician with the New Orford String Quartet, I am very thankful to him for the amount of dedication he shows bringing new Canadian works to the stage, and sharing the beauty of chamber music with young musicians through his teaching, and performance.” – Stephen Green, Dean

New Orford String Quartet
Andrew Wan, violin | Jonathan Crow, violin | Eric Nowlin, viola | Brian Manker, cello
Four musicians with equally stellar pedigrees formed the New Orford String Quartet with the goal of developing a new model for a touring string quartet. Their concept – to bring four elite orchestral leaders together on a regular basis over many years to perform chamber music at the highest level – has resulted in a quartet that maintains a remarkably fresh perspective while bringing a palpable sense of joy to each performance. The Toronto Star has described this outcome as “nothing short of electrifying.”

Consisting of the concertmasters and principal cellist and violist of the Montreal, Detroit, and Toronto Symphonies, the New Orford String Quartet has seen astonishing success. They perform annual concerts for national CBC broadcast and have received unanimous critical acclaim, including two Opus Awards for Concert of the Year, and a 2017 JUNO Award for Canada’s top Chamber Music Recording. Recent seasons have featured return engagements in Chicago, Montreal and Toronto, as well as their New York City debut on Lincoln Center’s Great Performers series.

Read more about the Quartet on their website. https://www.neworford.com/