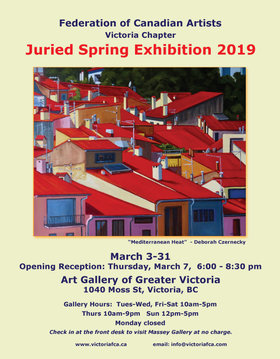 Visual Arts:
The Federation of Canadian Artists (FCA) is a national organization founded in Kingston, Ontario in 1941 and now headquartered in Vancouver. Nationally, The Federation of Canadian Artists was instrumental in the formation of the Massey Commission in 1949 and the subsequent formation of The Canada Council. In the west, the FCA established the Painting in the Parks programs in BC in the 1950’s, a program funded by Canada Council grants and copied around the world. Notable past Chairmen of the BC region of the FCA included Alan Edwards, B.C. Binning, Donald Jarvis, Gordon Smith and JAS McDonald. Currently, the FCA has nine chapters throughout BC and Alberta and a permanent gallery on Granville Island in Vancouver: Federation Gallery.

Each year in the spring and fall, the Chapter holds a show juried by FCA signature members (those who have attained high standing in the Federation).

Jurors look for the “wow” factor, good composition, mastery of the artist’s medium and technique, and originality of style. The result is a first class exhibition, varied in style and media, featuring the best recent works by some of the region’s top artists. All works of art are available for sale.