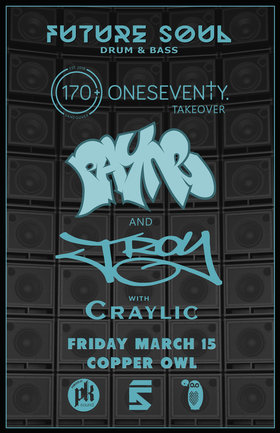 Music: Electronic / DJ
We're excited to be hosting a drum & bass takeover from Vancouver's freshest event crew, 170+! Payne & JRoy have been killing it in Vancouver hosting perfect nights, playing sublime sets, and creating next level vibes. Local selector Craylic will be opening up with his Future Soul Debut 🔥

Hailing from Toronto and currently residing in Vancouver, Payne has shared the stage with some of the biggest names in Drum & Bass. Having opened for icons such as Matrix & Futurebound, DJ Hype and DJ Hazard with most recently breaking into the drum and bass scene on the West Coast. Payne brings more to the table than just mixing records. Self taught on vinyl with an ear for melodic mixing and 10 years behind the decks, he focuses on bringing a vibe that will change your night!

Born and raised in Vancouvers rave scene, JRoy was engulfed by the sounds of Jungle and Drum and Bass.
In his early twenties, he took his love for the music from the dance,
to the decks.
Having played at raves, house parties and thrown a number of renegade beach parties throughout Vancouver, he eventually got the opportunity to play at one of BC's premier music festivals - Electric Love, sharing the stage with some of the biggest names in the game.
Still residing in Vancouver, he found his home within the Who Knew Crew where the love of festivals, and drum bass as a collective has grown stronger, eventually leading to creating the DnB production company 170+, with his good friend and Who Knew affiliate, Aaron Payne.

W/ support from Craylic
Craylic is a DJ and Producer from Toronto, Canada. Formerly a classically trained pianist and Jazz saxophonist, he has turned to the world of Drum and Bass in search of deep twisting basslines and the right amount of uplifting melodies to penetrate your soul.
https://soundcloud.com/craylic