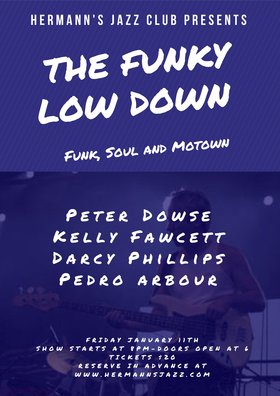 Music: Jazz / Blues
The Lowdown is a funk fuelled dance band that features big vocals, sophisticated harmony and one of the tightest rhythm sections in Western Canada. Drawing on influences from early New Orleans R and B to modern urban funk bands from Philadelphia, New York and Washington DC, The Lowdown is the brain child of bassist Peter Dowse, who made a name for himself as a producer and studio musician in New York City. After returning home to Canada, Peter formed The Lowdown with Victoria drummer Damian Graham, keyboardist Darcy Phillips and guitarist Kelly Fawcett. Expect to dance...