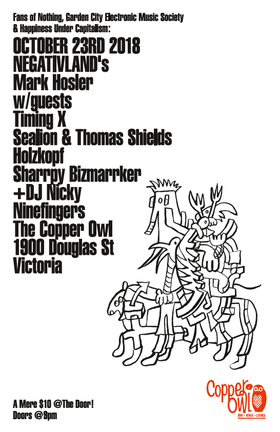 Declared heroic by their peers for refashioning culture into what the group considers to be more honest statements, Negativland suggests that refusing to be original, in the traditional sense, is the only way to make art that has any depth within commodity capitalism...
- NEW YORK TIMES

Negativland isn't just some group of merry pranksters; its art is about tearing apart and reassembling found images to create new ones, in an attempt to make social, political and artistic statements. Hilarious and chilling.
- THE ONION

A provocation and a punk-inspired commentary on our mercenary culture…eloquent and impassioned spokesmen for ideas like a “creative commons”…it’s salutary to see these smart and influential guys get a gallery show.
- ART IN AMERICA

Negativland is arguably the preeminent audio collage collective of our time.
- HI FRUCTOSE
Mark Hosler is a founding member of the American audio visual collage group Negativland. Since 1980 Negativland have been creating records, video, visual art works, radio, and live performance, using appropriated sound, image and text. Taken mostly from corporately owned mass culture, Negativland re-arranges these found bits and pieces to make them say and suggest things that they never intended to. In doing this kind of cultural archaeology and "culture jamming" (a term they coined way back in 1984), Negativland have been sued twice for copyright infringement.

Mark takes a break from his Negativland duties to perform live and solo using a performance set-up built around various homemade one-of-a-kind electronic noise making devices (including two of Negativland's original "Boopers”). In these performances Mark creates an engaging and musical soundscape performance with devices that are intentionally unstable analog feedback boxes. Sometimes sounding like insane, alien, electronic insects fighting each other, the Boopers create a non-linear dynamic "living" system of sound for Mark to interact with that ends up being a performance dynamic where the musician is a fellow collaborator with the devices, encouraged to converse instead of merely transmit. The Boopers used in this show go way back to 1975, when Negativland founding member David Wills created the first one, adding multiple transistors to a simple FM radio receiver, and sending its output back into its input. Various knobs control the amount of signal through the transistors, but the sound that emerges remains wildly variable, and incredibly fun to listen to. Using multiple Boopers (all based on Wills's original design) and other homemade electronics as primary sound sources, Mark manipulates and augments the raw sound sources into a choral rainforest of pure electronic ear candy, erasing any easy distinction between the machine and the human. He might also rock out a little bit, too.

In addition to live shows, CDs, radio shows, books, DVDs and visual art shows both solo and with Negativland, Mark has given over 100 lectures at various places like MIT, Yale, Princeton, Duke University, New York University, UC Irvine, UC Berkeley UCLA, Seattle University School of Law, Cranbrook Academy of Art, Universities of Arizona, Virginia, Tennessee, Georgia, North Carolina, and at various venues in Washington D.C, New York City, London, Rome, Berlin, Barcelona, Lisbon, Bologna, Lausanne, Amsterdam, Stockholm, Toronto, Vancouver, Honolulu, Sydney and Melbourne Australia. He has also given talks at the Regional Conference to End Corporate Dominance, the Consumer Electronics Show, the Conference On The Public Domain, World Fair Use day, and, as a citizen lobbyist, given presentations about art and copyright law to the offices and staff of various Senators and Congressmen on Capitol Hill in Washington DC.

In 1995 Negativland's released a 270 page book with 72 minute CD entitled "FAIR USE: The Story of the Letter U and the Numeral 2". This book documents their 4-year legal battle over their release of a single entitled "U2". San Francisco filmmaker Craig Baldwin produced a feature length documentary about Negativland, their "U2" single, culture jammers and other appropriation artists entitled "Sonic Outlaws" and Mark has appeared at many showings of this film to lecture, speak, debate, and answer the many questions that are raised whenever that film is shown. Negativland also created the soundtrack and sound design for Harold Boihem's documentary "The Ad and the Ego," an in-depth look into the hidden agendas of the corporate ad world that goes deeply into the gross and subtle ways that we are adversely affected by advertising.

The group continues to perform and tour, broadcast their weekly radio show '"Over The Edge," and more recent work includes "Our Favorite Things" (a feature length DVD collection of their many years of collaborative film work), various retrospective art shows in New York City, Seattle, Minneapolis, Houston, and Los Angeles of their visual collage work, and "It's All In Your Head" finds the group tackling their biggest subject ever: why humans believe in God. This ambitious and densely-crafted double CD is packaged inside an actual King James Holy Bible which has been appropriately re-purposed into a "found" art object. Negativland mixes found music, found sound, found dialogue, guest personalities and original electronic noises into a compelling and thoughtful musical essay on monotheism, Christianity, Islam, Judaism, neuroscience, suicide bombers, 9/11, colas, war, shaved chimps, and the all-important role played by the human brain in our beliefs. http://www.negativland.com http://www.facebook.com/Negativlandland

"The music almost defies description - it's on the thin edge of the chaos wedge." Lastsigh Magazine more info
Audio: The Speaker Hurts, Mahout
Submit info on this show to our admins