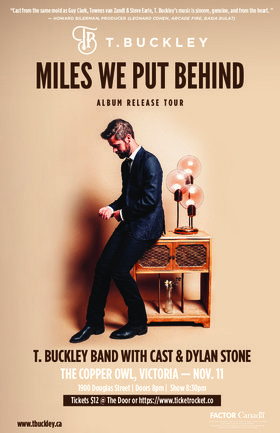 Music: Folk / Celtic / Latin / World
Alberta roots singer/songwriter T. Buckley is proud to announce the release of his fifth album, Miles We Put Behind - recorded the album at Hotel2Tango in Montreal by Grammy-nominated musician and producer Howard Bilerman.

For the past seven years Dylan Stone has been writing and performing songs, playing across North America in clubs, pubs, cafes, and house concerts. At 26 he is already a mature and reflective songwriter. Dylan’s predominantly folk-rock style of music embodies a deep respect for the acoustic roots and folk traditions but also an admiration for son... more info
Videos:

The Unfaithful Servants - Deliver Me