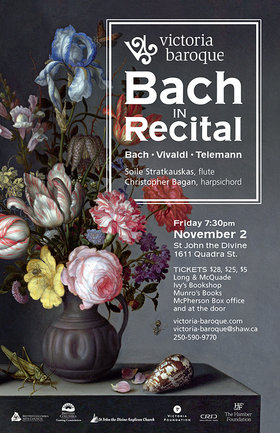 An intimate recital of sonatas by Bach and his contemporaries.
BC’s leading Baroque flutist is joined by one of Toronto’s most sought-after harpsichordists for a celebration of the magnificent imagination of some of Baroque Era’s greatest minds.

Now in its Eighth Season, the Victoria Baroque present high-quality, high-energy, and engaging performances of music from the baroque and classical periods. Playing on the instruments of the 18th century, the historically-informed ensemble brings audiences closer to the sound world of the period, embracing the dance-driven rhythmic vitality, as wel... more info
Videos: