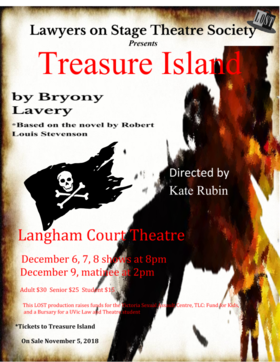 Theatre:
Treasure Island at Langham Court
Lawyers On Stage theatre Society (LOST) is pleased to bring Bryony Lavery’s thrilling adaptation of “Treasure Island”, based on Robert Louis Stevenson's classic story of money, mutiny, and murder, to Langham Court Dec 6-9, 2018.
In Lavery’s Treasure Island, Jim Hawkins becomes a girl rebelling against gender roles and women pirates (who actually existed) take centre stage in this imaginative adaptation. Lavery’s production premiered at the National Theatre, London, in December 2014 where critics said “ a richly enjoyable show… brings new life to a loved book and reminds us, through its adventurous casting, that bravery and daring are not a male prerogative.” Prepare for danger and excitement and the meaning of treasure in our own life!
Director Kate Rubin will return with her production team and a colourful cast of actors drawn from the legal community.
Shows will be at Langham Court Theatre 8pm December 6, 7, and 8 with a 2pm matinee December 9, 2018. Proceeds from the show will go to support the Victoria Sexual Assault Centre, TLC: Fund for Kids, and a bursary to a deserving law and theatre student at UVic.
Mark your calendars now (that’s Dec 6, 7, 8, and 9) for an evening of theatrical enjoyment and giving back to your community.
If you would like more information or want to support LOST in any way, please contact Andrew Pirie, President LOST, [email protected]