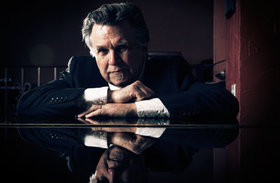 The congregation and visitors of the First Unitarian Church Victoria will be treated to a morning service of Jazz Vespers in the October Spirited Jazz. The community and jazz lovers are extended an open welcome to this service.

Although he’s a Maple Blues Award winner who now lives in Canada, David Vest is an authentic, Southern-bred boogie-woogie piano player, blues shouter and world-class entertainer. Born in Huntsville, Alabama in 1943, David grew up in Birmingham near Tuxedo Junction. He played his first paying gig in 1957, and by the time he opened for Roy Orbison on New Year’s Day 1962, he was a seasoned veteran of Gulf Coast roadhouses and honky-tonks.

“An amazing pianist -- rolls out the boogie like the players of old who'd tear up juke joints and turpentine camps.”Cascade Blues Association

He saw Bo Diddley, Jimmy Reed, and John Lee Hooker in the prime of their careers. About the time he turned 21 he found himself onstage with Big Joe Turner, who said that David Vest’s playing made him feel like he was back in Kansas City. His first Canadian recording, East Meets Vest, was named one of the best blues albums of 2012 by Holger Petersen of CBC’s Saturday Night Blues and earned a Maple nomination for Recording of the Year. Website: http://www.davidvest.ca

Time has done little to diminish David's energy, skill and creative drive. Working solo or with his band, he continues to bring audiences to their feet and to demonstrate why he has been called “one of the greatest living boogie-woogie piano players.”

David Vest is a five-time Maple Blues Award winner. He is an authentic, Southern-bred boogie-woogie piano pounder and a world-class entertainer, and his live shows are the stuff of legend. He backed Big Joe Turner in the '60s, toured with Jimmy T99 Nelson, Floyd Dixon and Lavelle White, and was co-leader of the legendary Paul deLay Band, sharing... more info

Available for solo, duo, trio, etc. … to big band, orchestral or theatre engagements. Gary has played across Ontario, in Mexico, Hawaii, the Middle East and performed in numerous venues on the Vancouver Island. His background features everything from solo and small group work to big band, orchestral theatre and touring. Studied in both classi... more info
Submit info on this show to our admins