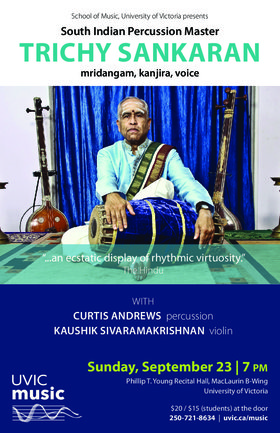 Music: Cultural / Heritage:
Expect to be transported to the outer realms of a virtuosic rhythmic imagination with grace, taste, and emotional depth with South Indian percussion master Trichy Sankaran. This concert focused on the drumming traditions of South Indian classical music/Carnatic music, will include of solo and ensemble performances including original compositions by Sankaran.

Sankaran is the world’s foremost mrdangam player and holds an honorary doctorate from UVic for his academic and musical accomplishments. A renowned percussion virtuoso, Indian music scholar and composer, Sankaran is the founding director of Indian music studies at York University in Toronto. Over the years, he has bridged eastern and western pedagogical styles and has influenced generations of students who have become noted performers, composers, and music educators themselves. In his 6 decades of concert experience in Carnatic music, he has accompanied all top rank artists of India, and performed in jugalbandhis (North-South combo) with famous Hindusthani musicians. In addition to his usual traditional settings and numerous solo recitals, he has performed with Nexus, gamelan, jazz, electronic, African music ensembles and world drums, as well as his own group, Trichy’s Trio.