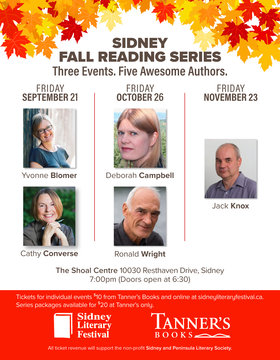 Literary:
An Evening with Cathy Converse and Yvonne Blomer

Cathy Converse writes historical biography with a focus on exceptional women. Her newest book, Against the Current: The Remarkable Life of Agnes Deans Cameron tells the story of Agnes (b. 1863) who was BC’s first female high school teacher and principal, an internationally published writer, one of the most significant writers of her time, itinerant traveller and promoter of western immigration.

Writer, critic, teacher and poet, Yvonne Blomer is the current Poet Laureate of Victoria, BC. She will read from her new book Sugar Ride: Cycling from Hanoi to Kuala Lumpar in which she tells of her experiences and impressions as she and her husband explored Vietnam, Malaysia, Laos and Thailand by bicycle. She has also recently anthologized and edited Refugium: Poems for the Pacific an anthology of prize-winning BC poets.

Yvonne Blomer has published three collections of poetry and co-edited Poems from Planet Earth (Leaf Press) an anthology out of the Planet Earth Poetry reading series. Her poems have appeared in Forcefield: 77 BC Women Poets (Mother Tongue Press) as well as in The Best Canadian Poetry in English (Tightrope Books) and A Crystal Though Which Love Pass... more info
Articles: Yvonne Blomer: the City's Poet
Videos: 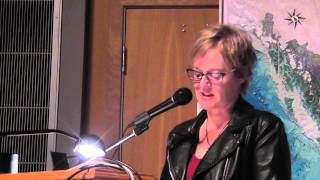