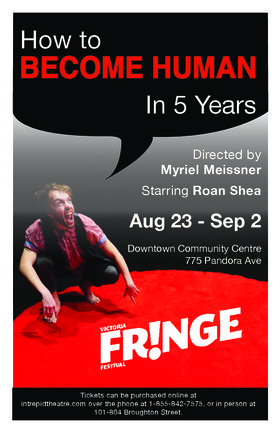 Theatre:
With biting humor and stark earnestness, How to Become Human in 5 Years follows the apish Red Peter from his imprisonment in a cage to Broadway's Theatre Stages. Adapted from Kafka's "A Report to an Academy", this celebrated one-man show subtly layers dark comedy, social satire and Kafka's equivocal language all to ask the question: What makes us human?

Roan Shea is a Boston native with a B.A. in Environmental Studies and Theatre Performance from Lewis and Clark College (Portland, OR). He is an actor and creator, whose recent credits include lead roles in Trifles, The Arsonists, Love and Information, and Edgar and Annabel. Roan is fresh off of directing and performing in his new original work, Knock Sniff, and is delighted to be exploring his ape nature in Victoria.

Myriel Meissner is a director, performer and educator from Austria, based in Portland, OR. She received her B.A. in Theatre from Lewis and Clark College and continued her education at The Institute for Contemporary Performance, where she received extensive training in composition methods, as well as Suzuki, Viewpoints and Clowning practices. Her most recent work Very Poorly Indeed has been developed as part of the ICP training program and premiered at CoHo Theatre in June 2018. As an educator she has worked at the Oregon’s Children Theatre and with New Moon Theatre Productions.