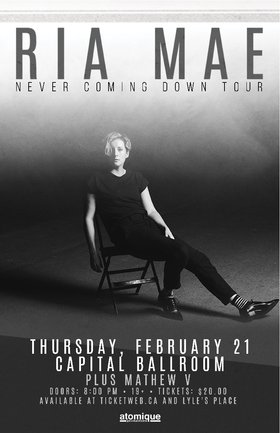 Music: Pop / Rock / Indie
Ria Mae is set to release a brand new EP this autumn, falling in line with the Never Coming Down tour, kicking off November 1st in Quebec City. The tour takes its name from a lyric on the forthcoming EP and hits twenty-one cities across Canada and New York State including Montreal, Toronto, Vancouver, and Buffalo. The album is centered on the concept of finding hope and light in a dark dystopian world. The lead single off the EP “Hold Me” is set for release September 28th. Both the new music and tour reflect a sonic and visual evolution for Ria Mae. As part of this transformation she has partnered with internationally renowned cosmetics company MAKE UP FOR EVER to help bring her vision to life through makeup. Ria’s forthcoming EP is a follow-up to the critically acclaimed My Love . The EP’s first single “Bend” became an instant hit, skyrocketing to Top 5 at Hot AC, Top 15 at AC, and Top 15 at CHR radio, reaching platinum certification status. Ria was nominated for “Album of the Year” at the 2018 JUNO Awards for My Love. Two years earlier, Ria also earned a JUNO nomination for “Single of the Year” for her platinum-selling hit “Clothes Off”.