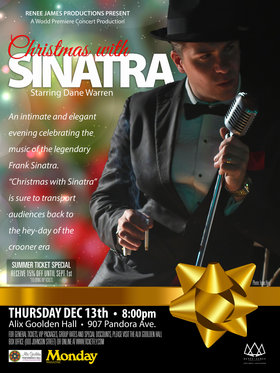 This new production is part of the critically acclaimed and award-nominated Legends Concert Series. The series first premiered in 2008 and its concerts has since played to thousands of audiences to standing ovations. CHRISTMAS WITH SINATRA will make its triumphant debut in beautiful Victoria, British Columbia for one night only this December.

SPECIAL NOTES:
Performances start promptly at 8:00 pm.
General Admission with the exception of VIP Ticket Holders.
Only 50 VIP Tickets available
Above prices do NOT include service charges and/or taxes