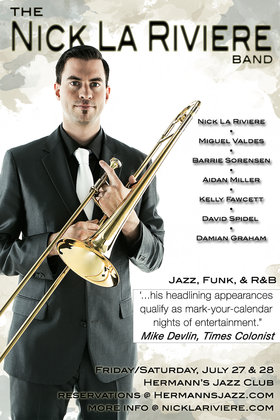 Music: Funk / R&B, Jazz / Blues
Singer-songwriter Nick La Riviere is an accomplished trombonist who tours internationally with bands such as the Juno award winning Paperboys, Michael Kaeshammer, and Adonis Puentes. He's been a special guest with such bands as 54-40, The Temptations, and Nikki Yanofsky. Drawing from his experience of playing shows of many different genres, Nick incorporates R&B, funk, and jazz into his own compositions. His high energy show has been a big hit at theatres and festivals such as The Islands Folk Fest, Victoria Jazz Fest, and Island Music Fest. Home town shows are consistently sold out and festival shows attract a dancing crowd.

The Nick La Riviere Band blows the room away with its powerful horns, talented soloists, and energetic tunes. The band performs originals as well as unique versions of tunes by everyone from Professor Longhair to Sly and the Family Stone. The 7 piece band features 3 horns, 3 singers, piano/synth, guitar, bass, drums, and some unusual instruments including conch shells and wine glasses. The memorable show is full of variety and fun. The band is even premiering some brand new music!

After a packed house at the last show at Hermann’s, the band is back to do two nights! Reservations recommended - you can reserve online at http://www.hermannsjazz.com