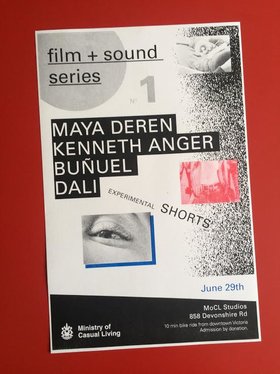 "The task of cinema or any other art form is not to translate hidden messages of the unconscious soul into art but to experiment with the effects contemporary technical devices have on nerves, minds, or souls."
– Maya Deren

The first in a series of monthly open air film + music nights featuring avant garde and experimental works by celebrated international directors, surprising local shorts from the archives and live sound from local musicians and DJs ...

This event is curated by Aimée van Drimmelen, Jameel Mulani, and Emma Holland. Thanks to MediaNet and CineVic for their support.