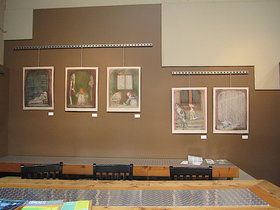 This series of nine mixed media drawings (graphite, oil pastel, white charcoal, crayon on Canson Paper, 25 x 20 in.) called out for attention after a bus ride on East Hastings Street in downtown Vancouver. Along that stretch, you witness every nook and cranny occupied by afflicted humanity.

These drawings were all conjured from what Stanley Spencer called "memory feelings."
No photographs were used as model or reference.
Though the project began with Vancouver's street scene in mind, only the first two drawings are situated there; most of the Homeless depicted here are familiar to me from my daily walk to my Rock Bay Square studio—here in British Columbia's Capitol!
Most encounters were one-offs—people I would never see again.
Of the people depicted in these drawings, at least two have died. This is known. One has survived a near-fatal beating.
Of the few I expect to see, after they have not shown up in their usual places for a while, I wonder what has become of them.
How do any live?

Kudos always to Aaron Tann here at The Coffee Lab for his continued generosity and to his superlative staff.
These walls are an invaluable resource for artists in the 'hood.

Listen to soul jazz singer Gregory Porter's fitting and poignant ballad
Take Me To The Alley
on his Grammy-winning Blue Note album of the same title.


Please use the Comments book on the north counter.