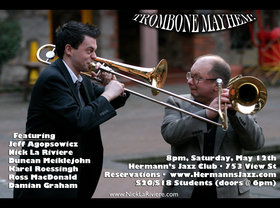 Music: Jazz / Blues
Trombone Mayhem features the blazing trombones of Nick La Riviere and Jeff Agopsowicz. Nick is a member of The Paperboys, The HiFi, and has performed with Michael Kaeshammer, 54-40, The Temptations, and more.. Jeff is a former member of Victoria’s Naden band. Together, they’ll perform everything from the Buddy Rich West Side Story Suite to tunes by Parliament and Kool & the Gang. The band features Duncan Meiklejohn on guitar and vocals, Karel Roessingh on keyboard, Ross MacDonald on bass, and Damian Graham on drums. Don’t miss it!

Singer-songwriter Nick La Riviere is an accomplished trombonist who tours internationally with bands such as the Juno award winning Paperboys, Michael Kaeshammer, 54-40, and Adonis Puentes. He's been a special guest with such bands as The Temptations, and Nikki Yanofsky. Drawing from his experience of playing shows of many different genres, Nick i... more info
Videos: