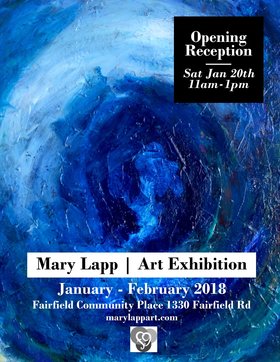 Visual Arts:
During the months of January and February 2018, the Fairfield Gonzales Community Association is pleased to display the stunning artworks of local artist Mary Lapp.
-------------
About Mary Lapp http://www.marylappart.com

Mary Lapp is a visual artist living in Victoria British Columbia. She holds a BSc in Psychology from Acadia University.
Lapp made the professional shift towards Art in 2015 in order to express her ideas and theories through visual expression. Lapp is currently working with acrylics in abstract form to release and share bold, uninhibited energies. Lapp works in order to add color to her world and express the freedom and movement she feels in dance and music. Lapp also works as a Teacher sharing her passion for creativity, art and music with children.