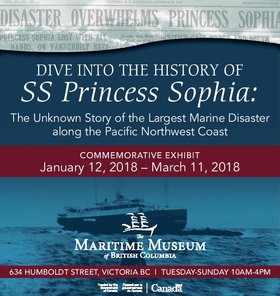 Cultural / Heritage:
Visit the Maritime Museum of BC for a special commemorative exhibit, SS Princess Sophia: The Unknown Story of the Largest Marine Disaster along the Pacific Northwest Coast, open January 12, 2018 – March 11, 2018. Nearly 100 years ago, SS Princess Sophia sank after 40 hours on the Alaskan Vanderbilt Reef, on its way back to its home port of Victoria, BC. The disaster left no survivors, claiming over 350 passengers and crew members. The exhibit brings together artefacts and archival documents from multiple organizations for the first time since being salvaged from the wreck, to tell the stories of those who lost their lives and the legacies the disaster has left behind.