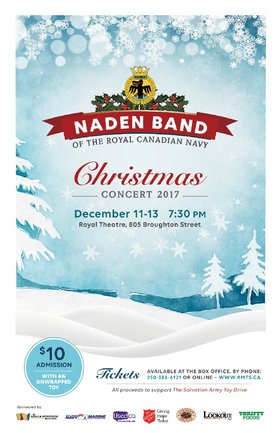 Music: Classical, Jazz / Blues
The Naden Band presents their annual Christmas concerts in support of The Salvation Army Toy Drive on December 11-13, 2017 at 7:30pm at the Royal Theatre, 805 Broughton Street. Tickets are $10 each – please bring an unwrapped toy in support of the Toy Drive. Help support families in your local community who may be struggling to make ends meet!

The role of Naden Band of Maritime Forces Pacific is to provide support for the Canadian Forces, particularly the Navy. The complete range of musical services for military, governmental, and civilian functions serves to heighten morale and esprit de corps throughout Canada. Military and public parades, ceremonial, commemorative and social events, d... more info
Submit info on this show to our admins