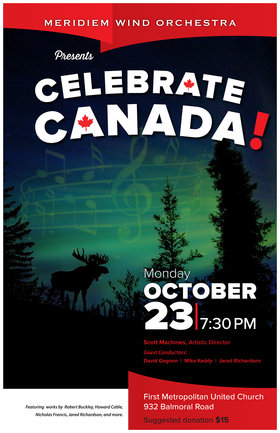 Music: Classical
Meridiem Wind Orchestra is comprised of professional musicians and educators who share a passion for playing the uniquely challenging and expressive music written for wind ensemble.

In honour of Canada's 150th birthday, Meridiem has curated a program of works composed entirely by Canadians. 4 out of the 6 composers featured currently live in British Columbia, two of whom will be traveling to Victoria to sit in with the orchestra for the performance.

The show will also be the world premiere of local composer Jared Richardson's new piece 'Spirit of the True North', which he will conduct. This is just one piece written with a nod to the natural beauty of Canada. Others include 'Land of the Midnight Sun' (Robert Buckley), 'McIntyre Ranch County' (Howard Cable), and 'Red Sky at Night' (Nicholas Francis) which was written for Scott MacInnes (trombone) to be premiered with the Kwantlen Wind Symphony. Scott MacInnes will again be the featured soloist for our October 23 performance of 'Red Sky at Night'.

As Canada celebrates its 150 years of confederation, we celebrate multiple generations of great Canadian band composers. The works on our program represent works composed between the years of 1918 and 2017. All of the music on the program is approachable and great to listen to, and proves that the future of Canadian band music is bright.

Suggested donation: $15 (pay what you can)

Wind Orchestra comprised of professional musicians & educators who share a passion for playing the uniquely challenging & expressive music written for wind ensemble. Although Victoria boasts a rich selection of community ensembles, the Meridiem Wind Orchestra stands out due to its complex repertoire which demands a skill level that only highly trai... more info
Submit info on this show to our admins