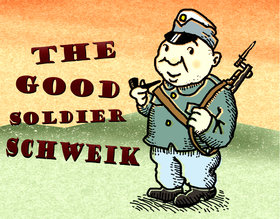 Nimchuk’s adaptation of Czech novelist Jaroslav Hašek’s 1923 great anti-war satire was a model of experimentation in the early heyday of Canada’s alternative theatre movement when it was first produced by Toronto Workshop Productions in 1969. Hašek died having completed only four volumes of his planned six-volume masterpiece, but Nimchuk has expertly woven together highlights from this work in such a way that we are immediately flung into the constantly evolving story of Joseph Schweik, with a momentum that refuses to abate. Schweik is either an idiot or a genius, and we are never sure if his survival and success are the result of the former or the latter. As with other great comic characters he remains oblivious to approaching doom, and it is this ignorance that proves his greatest ally. Schweik’s escapades with the army and with the established church represent Hašek’s indictment of both institutions, and – as is the case with most long-standing institution – his observations ring as true today as they did almost a century ago.

The show is about 90 minutes long, including one intermission.

Theatre Inconnu is located at 1923 Fernwood Road (across the street from the Belfry Theatre). For parking we suggest the side streets west of Fernwood Road as these do not have parking restriction signs.

We are wheelchair accessible. http://www.theatreinconnu.com