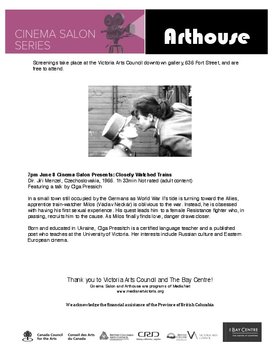 Film:
At the last Cinema Salon screening event of the year, we are showing the Czech film Closely Watched Trains, Directed by Jiří Menzel in 1966 (not rated - adult content). This will be followed by a talk with Olga Pressitch, Assistant Professor of Slavic Studies at the University of Victoria.

About the film: In a small town still occupied by the Germans as World War II's tide is turning toward the Allies, apprentice train-watcher Milos (Václav Neckár) is oblivious to the war. Instead, he is obsessed with having his first sexual experience. His quest leads him to a female Resistance fighter who, in passing, recruits him to the cause. As Milos finally finds love, danger draws closer.

Born and educated in Ukraine, Olga Pressitch is a certified language teacher and a published poet who teaches at the University of Victoria. Her interests include Russian culture and Eastern European cinema.