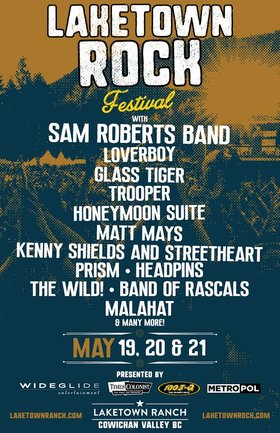 Music: Pop / Rock / Indie
Your Ultimate Music Festival In Cowichan Valley
The original vision of Wideglide Entertainment was to bring headline acts to the Cowichan Valley and provide opportunities for local artists to share the spotlight. Starting out with a one day rock concert at Providence Farm 16 years ago, Wideglide Entertainment now embraces all genres of music as the roots that have helped grow the one day concert into the ultimate music festival experience. Our gracious hosts at the Cowichan Exhibition provided the ideal concert bowl where local and international artists graced the stage surrounded by the stunning backdrop of scenic Mount Prevost, however in 2016 the festival moved to a permanent home. The new property at Laketown Ranch, located in Lake Cowichan boasts a 172 acre event site and the ability for our team to build the ultimate festival experience for years to come.

Wideglide Entertainment welcomes world class entertainment each and every year, and continues to find ways to showcase local artists, donate partial proceeds to local organizations, and maximize the economic benefit and exposure for the Cowichan Valley and Vancouver Island.

On the May long weekend Laketown Rock will attract thousands of music fans from all over the island and the province. Laketown Rock is more than just a concert, it’s a vacation destination. Thousands of people will be attending the first annual Laketown Rock during the kick off weekend summer!

We look forward to having you join us at Laketown Rock this year!

Roberts formed the band that was eventually known as William in 1993. The band's name was changed to Northstar in 1996. Although the band gained some notice in independent rock circles, they couldn't break through to a national audience, and broke up in 1999 after failing to release an album.[1] Roberts' bandmate George Donoso went on to significan... more info

Following a run of festival performances and a U.S. tour earlier this year with The Gaslight Anthem, Matt Mays is announcing his Canadian tour for the fall. Billed as a solo tour, Matt will be performing songs from his whole catalogue to intimate audiences in smaller venues. The largely acoustic shows will feature Matt hanging up his trademark Whit... more info

There’s a thunderous noise coming from the mellow landscape of Vancouver Island these days…Hailing from the Cowichan Valley this shaggy haired foursome burst onto the BC music scene with the release of their self titled debut EP in November 2014 and haven’t stopped since. Mixing vintage southern blues sensibilities with screeching and electri... more info
Audio: Down to You, Held in Thought (Not by You), Yellow Brick Road
Videos: