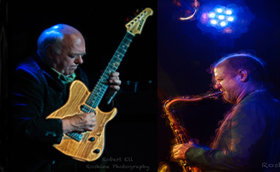 Enjoy jazz with a splash of spiritual inspiration.

Those who have been appreciating the short trip on a country road to a beautiful setting with top jazz musicians, completed with the musings of Reverend Shana, will be sure not to miss this upcoming vespers with the Ryan Oliver Mark Crawford Duo. A dynamite combo at the top of their professions, this pair of seasoned musicians will amaze you with innovative treatments and stylizations of Swinging Standards, Bossa Novas and Ballads designed as a memorable blast from the past.

A Juno-nominated, Victoria-based saxophonist, Ryan Oliver honed his craft on Canada’s west coast before moving to Amsterdam, Toronto and New York. Since returning to Vancouver Island, he has maintained a busy schedule as one of Canada’s most in-demand saxophonists. His most recent recording, “Strive” features legendary jazz drummer Victor Lewis. Oliver has toured Canada, India, Australia, New Zealand, South America, Europe and the United States with the legendary eclectic jazz group, The Shuffle Demons. He is also a member of Juno award winning blues/rock performer Derek Miller’s group. The band has traveled throughout North America, including performances at the New Orleans Jazz Festival, the Aboriginal Achievement Awards (broadcast on CTV), and Toronto’s Dundas Square. Oliver is featured in the horn section on “Derek Miller and Double Trouble”, featuring Stevie Ray Vaughn’s heralded rhythm section Double Trouble and musical icon Willie Nelson. The recording was nominated for a Juno in 2011. He has received numerous Canada Council and Toronto and Ontario Arts Council grants for touring, recording and education and was nominated for the 2013 Prix De Jazz for the Montreal Jazz Festival.

Mark Crawford is an Emmy-nominated composer, director, and producer that has traveled the world making films and absorbing cultures. His music and video work have been included in programs featured on National Geographic California Academy of Science, Harvard Kennedy School Fast Company and additional music for the award-winning feature documentaries Chasing Coral (2017) and Chasing Ice (2012). With his background in producing, directing and editing films, he understands the full spectrum of the production process, and knows how to best help the story with his music. He currently lives in Longmont, CO, where he composes from a home studio, enjoys the glorious outdoors and works on projects with his wife and producing partner, Larissa Rhodes.

Enjoy jazz with a splash of spiritual inspiration in venues with exquisite sound and setting. These hour-long evening services are a unique blend of jazz and spirituality. Each service brings together live music from popular local jazz musicians, a brief meaningful message, and a little of the history of the music performed.