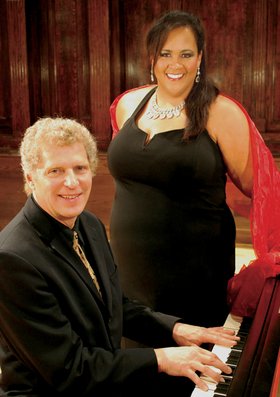 Karel Roessingh, the composer, arranger, producer and musician who has written hundreds of scores for TV and film, will be coming to perform at the Caleb Pike House.

Karel has performed with symphony orchestras and rock, jazz, and folk ensembles throughout the world. He has recently toured with folk icon Valdy and bassoon diva Nadina Mackie-Jackson, and accompanied singing sensations Tenore.

Karel has many of his own recordings, produced Canadian folk legend Valdy's latest CD, co-produced Maureen Washington's latest Christmas album, and played and arranged for a new CD by Edie Daponte. He is currently working on two new albums of his own.

Karel lives with his wife, artist Brenda Alexander-Roessingh near Victoria in the Highlands, where he has served two terms as Mayor and currently is in his 4th term as a councilor.


Maureen Washington: A popular performer at a wide range of events and venues and with more than a half dozen discs to her credit Maureen began her musical career in her home town of Prince George. Her vocal diversity lends itself to performances of blues, swing jazz and funk. Now based in Victoria, Maureen continues to create new musical avenues and is followed by a growing entourage of fans as she performs.

Not one to rest on her laurels, Maureen has also worked as a singer-songwriter, vocal instructor, has hosted and performed main stage shared the stage with such musical luminaries as Bruce Cockburn, Janis Ian & Martyn Joseph, and has twice hosted festival clinics with Lee Boys and Ruthie Foster and Amy Millan. ﻿

*To get a glimpse of Maureen Washington's music as well as to read about her and her awards and nominations you can go to website: http://www.maureenwashington.ca/

With a vocal style that encompasses the soul of Etta James, and Carmen McRae, the modernity of Holly Cole and the playfulness of Jann Arden; Maureen Washington evokes comparison to some of the great female Jazz singers of our time yet remains one of a kind. Maureen Washington songstress for a variety of different ensembles, began her music career ... more info
Audio: 01 Harvest Moon, 05 St James Infirmary, 13 Wait A Little Longer
Articles: Neil Young's Harvest Moon given new life in B.C. jazz star's latest album, Maureen at Christmas
Videos: