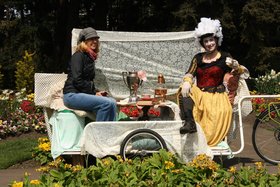 Music: Visual Arts:
Tea Party on a Bike Trailer is an interactive ‘mis-en-scene’ tea party,and sits directly on the PedalBox Gallery. Viewers are invited to join the artist on the seats created to drink tea and talk about being civilized. The set is filled with lacy fabrics, and ruffled pillows. Participants choose from four fancy tea cups, peppermint tea or early grey. The first stop was in Beacon Hill, then on the city streets outside of The Clay Pigeon followed by the final tea party on The Blue Bridge. The installation was then taken into a Gallery setting for the Limelight Youth Arts Festival in May 2014.