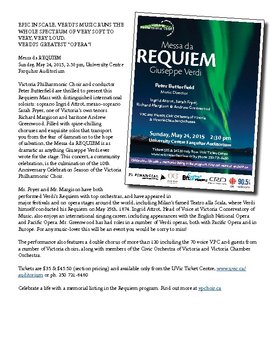 Victoria Philharmonic Choir and conductor Peter Butterfield are thrilled to present this Requiem mass with distinguished soloists: soprano Ingrid Attrot, mezzo-soprano Sarah Fryer, one of Victoria's own tenors Richard Margison and baritone Andrew Greenwood. Filled with spine-chilling choruses and exquisite solos that transport you from the fear of damnation to the hope of salvation, this Messa da REQUIEM is as dramatic as anything Giuseppe Verdi ever wrote for the stage. This concert, a community celebration, is the culmination of the 10th Anniversary Celebration Season of the Victoria Philharmonic Choir.

Ms. Fryer and Mr. Margison have both performed Verdi's Requiem with top orchestras, and have appeared in major festivals and on opera stages around the world, including Milan's famed Teatro alla Scala, where Verdi himself conducted his Requiem on May 25th, 1874. Ingrid Attrot, Head of Voice at Victoria Conservatory of Music, also enjoys an international career, including appearances with the English National Opera and Pacific Opera. Mr. Greenwood has had roles in a number of Verdi operas, both with Pacific Opera and in Europe. For any music-lover this will be an event you would be sorry to miss!

The performance also features a double chorus of over 120 including the 70 voice VPC and guests from a number of Victoria choirs, along with members of the Civic Orchestra of Victoria and Victoria Chamber Orchestra.

Celebrate a life with a memorial listing in the Requiem program. Find out more at http://www.vpchoir.ca