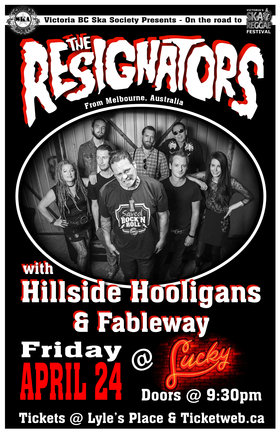 Music: Funk / R&B, Jazz / Blues, Pop / Rock / Indie, Punk / Metal / Hardcore, Reggae / Ska / Dub
Get ready for more good times with Melbourne, Australia's The Resignators with our Island's own Hillside Hooligans and Fableway. This show is a family reunion of our ska family down under meeting our reggae, punk and ska family from west coast Canada. You may have remembered that The Resignators played at the Victoria Ska Festival in 2011 and 2013 opening for The Planet Smashers at Market Square and with Rude City Riot at Lucky Bar. If you didn't see them you're in for a treat with this edition of our On the Road to Ska & Reggae Festival.

The Hillside Hooligans play gritty and soulful reggae, ska and punk-rock. Their style is characterized by honest lyrics, prominent solos, and plenty of style and tempo changes to keep things interesting. The four founding members played together in Victoria’s reggae/punk favorites One Drop for over 6 years before starting this new project wi... more info
Audio: Get High, Jimmy, Babylon
Videos:

Fableway Is a high energy punk band who have been hoaning their live performance for 18 years. Influenced by the likes of; Propagandhi, Pennywise, NOFX, Lagwagon, Satanic Surfers, No Use For A Name , Strung Out , Guttermouth, and Jughead's Revenge more info
Submit info on this show to our admins