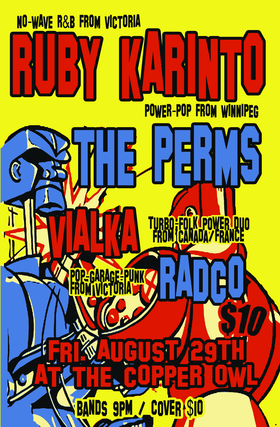 An event not to be missed!

The Perms formed in 1997 in Brandon, Manitoba, Canada when Shane Smith asked his brother Chad and his high school friend Paul Thorsteinson to form a power pop group. After three months, they recorded their debut album "Tight Perm" and then signed on with Hugtight Records. The record was released later on that year and attracted a very positive buzz. more info

Hailing from deepest France, via everywhere and nowhere, Vialka are a devilishly high-spirited nomadic duo whose frontier-touring has taken them to all corners of the globe on a seemingly permanent world tour since their formation in 2002. Deriving their influences from traditional and modern underground music from around the globe Marylise Frechev... more info