The Biltmore Cabaret Vancouver BC

The Biltmore Cabaret & BeatRoute (BC) PRESENT: Bry Webb (of the Constantines)...

The Biltmore Cabaret (No Minors)

For over 50 years, the Biltmore has been a fixture in the co...
Open / Operational

The Biltmore Cabaret & BeatRoute (BC) PRESENT:

Bry Webb (of the Constantines)
with guests

Bey Webb grew up in Southwestern Ontario, Canada. He was the singer/guitarist in The Constantines from 1999 to 2010. His work with The Constantines was released on the reputable independent labels Sub Pop, Arts & Crafts, Three Gut, and Blue Fog.

For many years, Bry has been making quieter songs, outside of the bombast of The Constantines. He has performed many of these songs live, opening for Oakley Hall, Al Tuck, Christine Fellows and Dan Mangan, among others, and appeared at Sappyfest and the Dawson City Music Festival. His songs Positive People and Big Smoke were featured in the 2007 feature film, This Beautiful City. The latter was nominated for a Genie Award (Canada’s Grammys) for Best Original Song in 2009. In May 2010, he traveled to Haida Gwaii (Queen Charlotte Islands, BC), to record a site-specific score for the film project and Discovery Channel series The National Parks Project with Jim Guthrie, Sarah Harmer, and filmmaker Scott Smith, which was released, along with a companion soundtrack, in early 2011. Recently, Bry was invited to appear as guest vocalist on the first song on Feist’s album, Metals, and to perform as the opening act on the Canadian leg of her 2011 tour.

In November 2011, Bry Webb released a collection of nine songs on the independent label, Idee Fixe. The recordings were made in three days with engineer/producer Jeff McMurrich (Jennifer Castle, Sandro Perri, Owen Pallet). Bry, along with lap steel player Rich Burnett, pedal steel player Mike Brooks, and upright bassist Tyler Belluz, recorded the album almost entirely live off the floor, playing together in one large room at 6 Nassau in Toronto. The album is eerie, minimal, and organic. It’s called Provider.

ON SALE IN STORES FRIDAY MAY 16 AT ZuluRecords Store, Red Cat Records 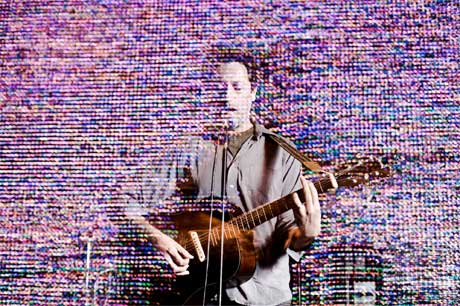