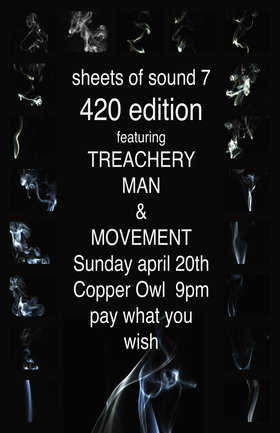 Music: Electronic / DJ, Jazz / Blues
The Copper Owl's monthly SHEETS OF SOUND is back!! This time it falls on a special day, April 20th.

$8 suggested donation but really it's pay what you can!

other sites: | spoti
The Movement has been winning the hearts and minds of alternative-reggae fans since their inception in Columbia, SC in 2003. Drawing inspiration from Sublime, 311, Slightly Stoopid and John Brown’s Body, they’ve come to be known as musical shapeshifters with a foundation of heavy drum and bass. Today the band consists of founding member, lead v... more info