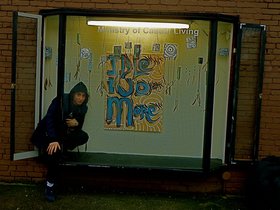 Music:
Ryan was born and raised in Southern Alberta, growing up mostly in Red Deer and Innisfail. Although he was raised in a Non-native community he is reconnecting with his Blackfoot roots (Siksika Nation). Art and storytelling are one of his modes of exploration. Ryan Willert has learned the art of black ink drawing and sales from his father Richard (Dicky) Stimson, another well-known Siksika Nation artist. Ryan is a storyteller that has had his stories read in front of hundreds of people, including those who attended Calgary’s Aboriginal Awareness Week at Mount Royal College in 2008. Along with his initiatives in art, Ryan has been invited on several occasions to speak in front of youth and adult classes for life skills students through the Personal Support & Development Network and other special initiatives; including 2008’s Future Aboriginal Business Leaders Symposium in Pincher Creek. He has been sought out as an important role model in the community, especially for youth outreach and inspiration. His films and artwork have been showcased at the Glenbow Museum in 2009, and his art had been used for the city of Calgary during their smoke free Calgary campaign website in 2007. Ryan received artist of the year through the New Tribe Magazine in 2010 and is currently a full-time artist living in Victoria B.C.