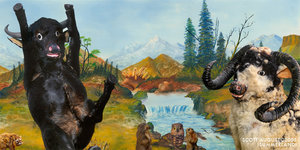 Visual Arts:
Scott August is a British Columbia based artist whose work often questions the relationship between man and nature. August’s work is primarily made up of montaged photographic images, often using unusual toys, found paintings, taxidermy, and awkward images of himself as the subject matter. By using printed backdrops, costumes, miniatures, and objects from nature, August utilizes digital technology only as a production tool, he ...focuses on creating work that is more timeless and aesthetically traditional then the work of his generation’s many other digital artists.

The exhibit "Found Landscapes: Interventions in Nature" is a collection of large scale canvas prints which have been produced over the last six years. The earlier work includes The Lobster Series, four sequence shots of an over confident lobster costumed beach goer as he struggles in his natural surroundings, known as the lake. The 2005 work entitled !Summerland! is August's depiction of a rare and elusive woodland party with a strange guest list (an overexcited bull, a friendly bighorn sheep, a pair of odd otters, and a bitter fox). The complementary work !Winter!, paints a story which is bleak and disastrous, proving once again that an unprotected above ground hibernation is not often a wise decision for our warm blooded buddies. A newer work, entitled Bear Peeking Over Mountain Gets New Cowboy Friend, documents a twenty-two foot tall photograph of August (dressed a cowboy) awkwardly engaging himself with a large wooden bear billboard (a popular 1980's folk art landmark ) on a hillside above the sleepy town of Keremeos B.C. This work is the first of a new series of work (or elaborate pranks) he is proposing to execute in regards to public art and large scale roadside attractions.

About the artist: After studying traditional photography and printmaking at the University of British Columbia Okanagan (Kelowna, BC), August received a BFA (with Honors) in 2002. His work has been exhibited at the Alternator Centre for Contemporary Art (Kelowna), the Kelowna Art Gallery, the Café for Contemporary Art (North Vancouver), the Three Walls Gallery (Chicago) and the Pop Montreal art and music festival (Québec).

August is also a musician, solo under the name French Paddleboat, with records on Scratch Records (Vancouver), Catsup Plate Records (New York), and K-RAA-K (Belgium) as half of Vote Robot. His own label released early records by Destroyer and more recently two new side projects by members of Vancouver's Ladyhawk (SPORTS and Duffy and the Doubters).

August hates writing about himself in third person and hopes someone else will one day take interest and do this writing for him!