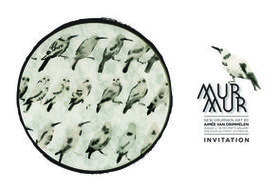 Visual Arts:
MURMUR is the latest series of drumskin paintings by Canadian artist, illustrator and animator Aimée van Drimmelen. Working exclusively on synthetic drumheads, that youʼd normally find on a bass or snare drum, this solo show studies the rhythm, motion and eccentricities of the Common Starling, an invasive species of bird that thrives in urban environments. MURMUR marks an exciting turning point for van Drimmelen, who for the first time combines her signature ink and water technique with hand drawn animated stills, studying every move these birds make with organic ink depictions that seek a commonality between them and ourselves.

Native to Europe and Western Asia, starlings were first introduced to North America in
1890 by Eugene Schieffel, president of the “American Acclimatization Society” (a group that tried to introduce every bird species mentioned in the works of William Shakespeare to North America). Schieffel released 100 birds in New Yorkʼs Central Park, which quickly proliferated, causing havoc to native bird populations and becoming a continental scourge.

Today there are an estimated 200 million starlings in North America. Starlings prefer urban settings and will aggressively displace native birds from their nesting sites. They are very vocal birds, constantly singing, chattering and mimicking other species. Before roosting, groups of starlings gather in sometimes staggering numbers, flying back and forth in a calculated cosmic ritual known as “murmuring,” which is both awe inspiring and terrifying to watch: http://vimeo.com/31158841. In a way “we” murmur also.

Unique illuminated wall mounts made from actual drums will be a focal point for this exhibition, as well as works mounted on actual vintage marching band drums collected by the artist. Originals and limited edition prints will be available for sale at via the gallery and online.