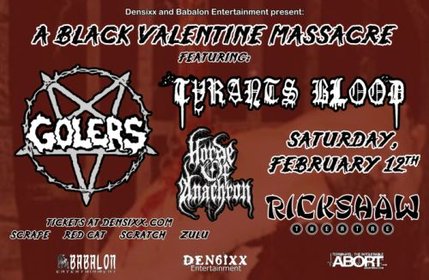 Music: Punk / Metal / Hardcore
Kill the flowers, melt the chocolate, and stomp your dead and lifeless hearts into the ground on Saturday the 12th of February...
Come down to the Rickshaw where love and romance will be chewed up, regurgitated, and chewed up again on this night of fast, dark and heavy intimacy.

Vancouver’s infamous punk/metal act The Golers are set and primed to carve their 2nd Generation of South Mountain style Backwoods Messages into your heads on this evening of non-romance.

The dominating and sinister blackened death-metal locals Tyrant's Blood return to the Rickshaw to top their prior punishing display on the venue’s stage. Prepare to be brutalized violently by the unholy might of
their live performance.

Opening the evening’s journey into the abyss are Victoria's black metal warriors Horde of Anachron to deliver the black book’s venomous word and remove any remaining innocence from your feeble souls. Mindless believers in absurd monotheism beware!

Think you can you handle it? Prove it, weakling....

Formed in 1998 after the dis-banding of Subversion (of which ALL four members were also part of... Walter Mason [Chainsaw Charlie] – Vocals and Guitar Derek Rockall [Henry the 1st] – Guitar and Vocals Stuart Carruthers [Jonny] – Bass and Vocals Jason Mosdell [Cranswick] – Drums GOLERS has built up momentum over the course of 4 al... more info
Videos: 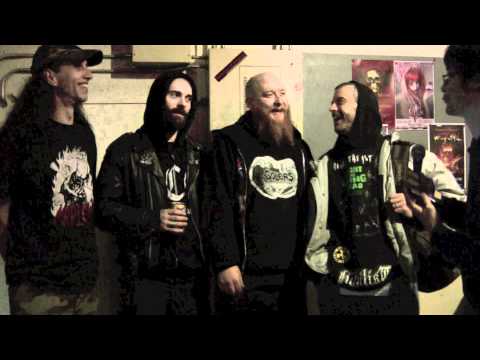