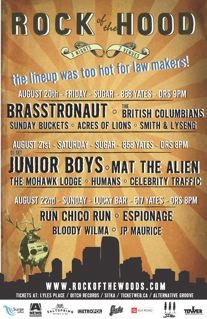 Music: Folk / Celtic / Latin / World, Pop / Rock / Indie
After pouring our hearts and souls into this event we have now decided to bring the “woods” to the "hood". Instead of one day were going to turn this festival into three and host it right here in Victoria.

After many months and many ups and downs the local government shot down are original site. To get the full story check out: http://wp.me/poyqT-3w

The Rock of the Woods team did not give up… Prepare to get your sox knocked off!

All three days will cost $45, here are the deets:

Your ticket gets you a wrist band that gives you access to both venues guaranteed entry until the end of the first hour that doors are open. (Don’t worry you can still get in after that but you might have to wait.) Additionally now you have the option of enjoying just one of these events if you can’t make all three. Please keep in mind we only have 200tix left!

Run Chico Run (what you can't but dig)

After schooling together in Victoria BC, Matt Skillings and Thomas Shields formed the band in 1997. The name is taken from the title of a book about New York weed addicts by a "beat" writer who probably never visited New York City or sampled the dank sacrament. After dicking around with a long string of unreliable bass players and lead guitar showb... more info

bad bunny. more info
Submit info on this show to our admins